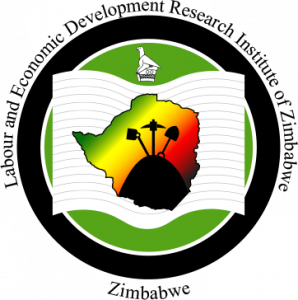 The Labour and Economic Development Research Institute of Zimbabwe (LEDRIZ) is a research-based Think-Tank established in 2003 and registered under the Deed of Trust. LEDRIZ is governed by a Board comprising six trade union leaders nominated by the General Council of the Zimbabwe Congress of Trade Unions (ZCTU) and four distinguished academics and civil society leaders. LEDRIZ runs under an Executive Director with supporting staff such as Accountants, Programs Manager, IT Officer, Projects officer and assistants. The main objective of LEDRIZ is to develop through research ‘well-grounded pro-working people, policy positions designed to influence development processes and outcomes at national, regional and international levels’(source). LEDRIZ's vision is an empowered labour movement able to influence policy formulation, decision making processes and outcomes towards human centered development. Its research is intended to be of a high standard, practical and relevant in order to reach, and be used by, a wide spectrum of stakeholders ranging from the labour movement, cooperating partners such as other research institutes, business, government and other interested groups. Its mission is crafted around strengthening the labour movement's capacity to carry out policy-oriented research that will protect, safeguard and advance the rights and interests of working people in Zimbabwe. In pursuit of the achievement of its strategic objectives, LEDRIZ carries out the following:

LEDRIZ carries out annual audits as well as program reviews during the course of the year. Policies such as Human Resources and Staff Development, Gender and Sexual Harassment, IT, and Conflict of Interest have been put in place to address issues that may arise within the organisation.

LEDRIZ’s organisational strategy is internally developed and covers themes such as Social Justice, Inequality, Democracy, and Economic Justice. Areas of focus under the different themes are as follows:

Under the ‘Social Justice’ theme, LEDRIZ engages in:

Under ‘Inequality’, LEDRIZ focuses on:

Under ‘Democracy’ LEDRIZ focuses on:

Under the ‘Economic Justice’ Theme, LEDRIZ focuses on

During the last two years, LEDRIZ had several funded projects. Amongst the currently running projects are Decent Work Agenda with the European Union; Transitioning Informality to Formality; Socio-economic Rights; Green Economy and Jobs; and Analysis of Economic Policies (fiscal and monetary). The funding cycles of the projects are between six (6) months to 24 months with the funders mainly being bilateral development partners and funding of up to US$1,000,000 depending on the type of project and its duration.

Since its establishment, LEDRIZ has been a producer of evidence-based research which it has used as an indispensable tool for making policy recommendations for the adoption of sound policies in Zimbabwe and across the sub-region. Depending on magnitude and scope, research at LEDRIZ is carried out by either the internal team, research fellows, or external consultants. In its first year of establishment (2004), LEDRIZ published two main articles and produced several reports from surveys and studies. Research carried out includes issues around gender and market liberalisation in Zimbabwe, deciphering the impact of globalisation and trade agreements on the Zimbabwean economy. Over the last three years, LEDRIZ has produced under the main thematic focus area of ‘Economic Justice and Governance’, more than 12 newsletters, monographs, reports, and over 12 books have been published, printed and distributed. LEDRIZ has over the years adopted the use of other information dissemination vehicles such as dialogues, conferences, round tables, launch events, workshops, TV and radio appearances, targeted meetings and memos. In each year, LEDRIZ has hosted and attended over 15 of the above events, inviting individuals and organisations from CSOs, NGOs, embassies, business sector, government officials, political parties, donor agencies, and the general citizens. Regarding advocacy actions, LEDRIZ carries out advocacy through preparation of policy briefs to support policy positions, analysing and communicating policy gaps as well as suggesting new models, engagements with policy makers, and mobilising network(s) seeking policy change at local, national and sub-regional levels.

Constituency and Movement Building and Collaborations

Having been born out of the need to service and provide research under ZCTU, LEDRIZ has special interests in labour-related and workforce issues. However, the organisation also serves

The above have also played various roles such as helping establish the organisation, suggesting areas of focus, being involved in mapping the problems that the organisation should focus on while some users of LEDRIZ’s information and beneficiaries also fund some of its work. LEDRIZ has collaborative partners in the labour sector across the region such as the National Labour and Economic Development Institute (NALEDI) based in South Africa, the Labour Resource and Research Institute (LaRRI) from Namibia, and the Southern Africa Trade Union Coordination Council, based in Botswana. In its collaborative efforts, LEDRIZ has managed to increase the visibility of its work, thus generating a wider reach; enhance its effectiveness; gain and provide access to vital platforms, benefit from training, and receive access to information as well as resources. With its collaborative partners, LEDRIZ has and continues to undertake joint implementations in similar projects, provide research-based evidence to advocacy focused partners as well as provide technical assistance.

Cognisant of the four approaches and methods used to access Think Tank impact, LEDRIZ’s donors mainly measure and evaluate their impact based on outputs indicators such as publications produced (policy briefs, books, journal articles), convenings, dialogues,  seminars organised, staff nominated for government posts; impact indicators such as recommendations considered and/or adopted by policy makers and utilization indicators such as consultations by officials or government agents, quality of media appearances and citations. Internally, LEDRIZ commissions regular evaluations, does ongoing internal monitoring, promotes feedback from partners, and also considers government adoption of prior policy recommendations made. LEDRIZ also has several reports and citations from the media, both written and online, written/ recorded affirmation by beneficiaries and independent evaluation report.

Think Tanks programs and projects should be able to fund themselves. Thus, if an organisation is able to demonstrate the impact and effectiveness of its work, then eventually, that may contribute to its sustainability by offering other avenues to generate revenue, or to either raise funds or reduce costs. LEDRIZ operates on a US $500,000.00 annual budget with 20% of it dedicated to institutional support/administration costs. Operating with the guidance of a financial policy and a sustainability plan, LEDRIZ funds its work through fundraising and consultancy incomes. In response to an external changing environment, LEDRIZ engages in a mapping exercise and conducts ongoing internal reviews as measures. On a scale of 1-10, LEDRIZ identifies the funding situation, information technology, and language barriers to penetrate some social systems, for example, at grassroots level as the major threats to their existence and deliverance of their work.